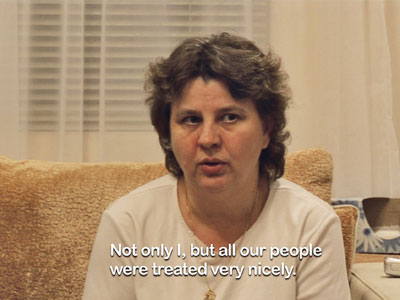 Shedding Details is a by-product of a documentary project on the Culinary Union, a Las Vegas labour union. Slavica Tricolic worked for ten years in Caesars Palace on the Las Vegas Strip as a cleaner, was tricked into making a mistake and fired. Through her colleague Jerosima Tanakovic, she asked Gerhard Friedl and Laura Horelli to record an account of the circumstances of her dismissal. Just before the recording, however, it became clear that the story would be told in two languages, one of which they did not understand. The camera was already on when Dejan Zoric offered to translate into English. Later, during the editing phase, Nives Konik translated the Serbo-Croatian in the video and Friedl and Horelli realised the discrepancies between Slavica’s words and Dejan’s translation. This was a so-called professional translation, so in its way objective. Shedding Details is a film on the verbal depiction of work, a film about a necessary account in a moment of crisis, and a film about the conditions of its own production. The film thus addresses the conditions, problems and aporias of documentary practice.

Produced with the support of Villa Aurora, Los Angeles