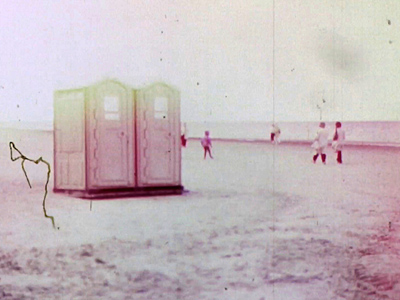 In September 2010, Latvian curator Agnese Luse invited nine Berlin-based female artists to Riga for a week, in order to present their films at the Survival-Kit Festival. After five days of discourse and lively discussions about the precarious realities of women artists in the workplace, they decided to spend the last Sunday of their visit at the historical beach in Jūrmala. The trip began with a Super8 Camera.

The film owes its dramatic composition to the idea of the refrain: each of the authors individually conceived and personally created a soundtrack to a one-minute film fragment. The cohesiveness of the film is rooted in the soundtrack montage, which relates to and reinterprets the picture track as it repeats itself.

While the women are performing on the beach, wandering in and out of portable toilets installed at the beach and slamming the doors of the cabins – presumably reflecting the discussions of their week together in Riga – a woman passing by on the beach joins their choreography, entering the frame shortly before the clip ends. She poses an existential question: she asks if the toilets are free to use, and then enters a cabin. Staging, chance, and reality go hand-in-hand.